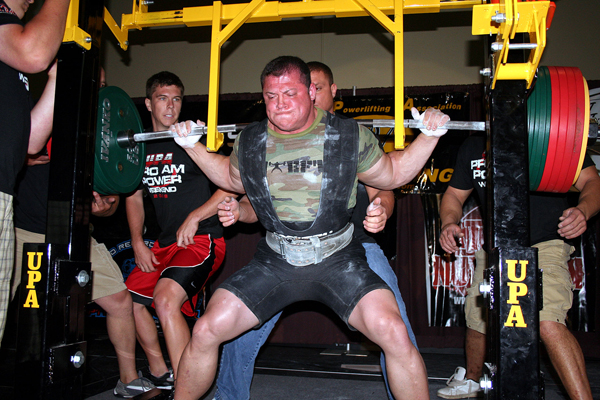 Whether you are a body builder, powerlifter, Olympic lifter, or recreational athlete, you’ll probably get a kick out of seeing just how much you can lift (or in some cases, it’s your job). While some weight lifters try to hit a new 1 repetition maximum (1RM) on the main lift every single workout, this is usually not a good idea. The potential for injury and over training increases with every max effort lift you attempt. Instead, a better philosophy is to ramp up to testing your 1RM using several 3-4 week micro-cycles. However, that is a discussion for another day.

Today I want to address the 1RM test itself, or more accurately the max effort test. If you are not in a competition at that exact moment, there is really no need to attempt a true 1RM. As long as you have a stable frame of reference for your max effort attempt, you will be able to quantify your progress. I would like to suggest using 2RM for your max effort attempt. The reasons for this are several – safety, psychological, CNS activation, and time under tension.

Strength coach Christian Thibaudeau explained it best throughout a series of 6 tweets titled “2RM better than 1RM for max effort.”

In case you are not subscribed to Christian’s Twitter feed or Facebook page, allow me to re-print his thoughts below:

You Have to Train Heavy to Grow

Do Bodybuilders Have to “Max Out” to Gain Muscle?

You may have seen or heard cliche slogans like “Go heavy or go home.” You may have been asked “How much do you bench?” You may even be impressed by Olympic lifters, powerlifters, and professional strongmen, all of whom regularly use maximum effort triples and singles to prepare for competition, to try to set a personal record, or just as a component of their regular training routines.

Well guess what? None of those sports are like bodybuilding. Sure, Olympic lifters are typically pretty jacked, powerlifters and strongmen are just plain “big”, but very few of them could compete in a bodybuilding competition and hope to win, without first dieting and training like a bodybuilder for several months.

This brings us to the question – do bodybuilders ever actually have to test their 1 or 3 rep max on any exercise? Do they have to lift super-heavy?

END_OF_DOCUMENT_TOKEN_TO_BE_REPLACED

You Shouldn’t Train When You Are Sore

Should Bodybuilders Train When They Are Sore?

This is one of the top offending bodybuilding myths. Have you ever canceled a workout or skipped training a body part because it felt sore, even though at least 48 hours had passed since you trained it? If you said “Yes”, then after reading this post you will never make that mistake again.

Your muscles will get sore when you use:

Do you need to avoid these training methods completely in order to prevent soreness, so that you can train again in two days? Not necessarily.

END_OF_DOCUMENT_TOKEN_TO_BE_REPLACED

The Psychology of a Max Effort Attempt

The technique of using visualization in sports training has become increasingly popular in recent years. While some people may question its effectiveness, research has found visualization can be quite successful.

A study conducted by Guang Yue, a psychologist from Cleveland Clinic Foundation, found that non-professional people gained 13.5 percent muscle strength just by carrying out mental exercises. Luckily, you don’t have to earn a psychology degree to understand or practice visualization; read on to learn how you can use this technique to psych yourself up to hit the gym and set a new personal record.

How to Use Imagery and Visualization

Over the years, many professional sportsmen have made use of visualization to achieve great success. For example, world champion golfer Jack Nicklaus, states that he never fires a shot, even while in practice, until he visualizes it clearly in his head. Muhammad Ali is also known to have used varying mental exercises to help improve his performance.